What is dermatitis herpetiformis?

Dermatitis herpetiformis is characterised by an itchy, blistering skin rash which usually occurs on the knees, elbows, buttocks and back, however, it can affect any area of the skin.

In the UK about 1 in 3,300 people are diagnosed with Dermatitis herpetiformis which makes it less common than coeliac disease. It is most often diagnosed between the ages of 50 and 69 years but can occur at any age.

Diagnosis of Dermatitis herpetiformis is confirmed by a simple skin test called a skin biopsy. A dermatologist (skin specialist) takes a small sample of skin from an unaffected area. This is then checked for the presence of an antibody called Immunoglobulin A (IgA).

If the skin biopsy is positive, you should be referred to a gastroenterologist (gut specialist) for an endoscopy. This is a test that allows doctors to obtain a small sample of bowel cells (biopsy) which can be examined under a microscope. This will show signs of gut damage that is caused by eating gluten and is used to confirm a diagnosis. 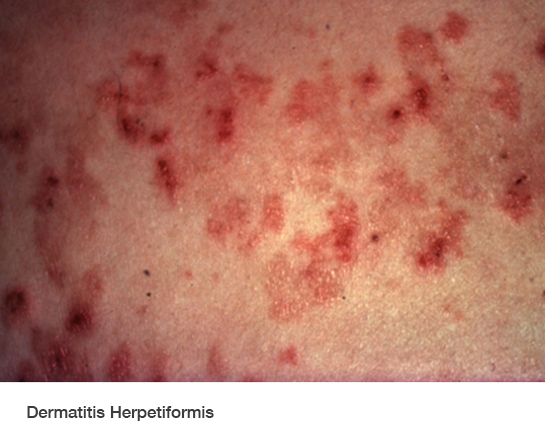 Even though you may not have gut symptoms, most people with Dermatitis Herpetiformis have gut damage. It is important not to remove gluten from your diet until the antibody blood tests and biopsy have been carried out to ensure an accurate result.

If you have already removed gluten from your diet, you must re-introduce it for at least six weeks, consuming gluten at more than one meal every day, before the diagnostic tests are performed.

How is dermatitis herpetiformis treated?

A gluten free diet is the main form of treatment and the most effective in the long-term, however the time taken for the skin rash to improve varies between individuals. It is common to have a drug treatment initially; the most commonly prescribed drug is called Dapsonewhich will help to control the rash, however, it will not treat any other symptoms and so a lifelong gluten-free diet is a key part of the treatment.  People with DH are at risk of the same associated health complications as those with coeliac disease and the risks of these are reduced by following a gluten-free diet.

If you have any questions about dermatitis herpetiformis please contact us here. 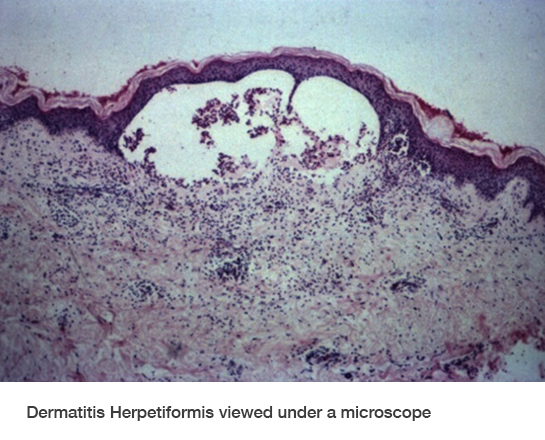