Aaron’s diagnosis story, as told by his Mum, Kim

I am Aaron’s Mum, I will be telling Aarons story as he has Downs Syndrome and is unable to write himself but he will help with what he wants to say.

Aaron’s symptoms of coeliac disease started with a skin rash…

Aaron’s story begins with a very irritating rash on his shoulder. We took a trip to see our GP who diagnosed ring worm… to be fair it did look like ring worm and at the time was just a small area on his shoulder. She prescribed an ointment to apply which obviously didn’t work and the rash steadily grew to cover pretty much his entire back, it was red and itchy and still had the appearance of ring worm so back to the GP we went. She prescribed a stronger treatment and we duly went home and completed the course but again there wasn’t any improvement.

On our third trip to the GP she took a core sample, very painful… think apple corer! …which was sent to the hospital for analysis. The results came back as an undefined centripetal rash and were told there wasn’t much they could prescribe so Aaron was given Doublebase to shower with and just a simple emollient to help with the itch.

Aarons words: I was really upset and it hurt a lot, it was all red and hot and itchy and it won’t go away. 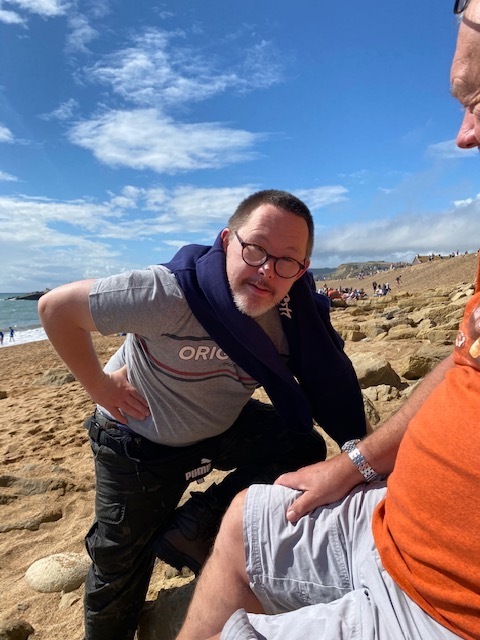 One day after showering Aaron was very distressed and crying with the soreness of his skin, the rash by this time had crept down his arms and into the backs of his hands.

We again went back to the GP and I admit by this time I really had had enough, Aaron was in so much discomfort and the whole thing was getting on top of him. I insisted we look further into why this rash was spreading as we felt it totally unfair that he be expected to live with it without exhausting all avenues of investigation. We were referred to see a consultant dermatologist who asked that Aaron have blood taken before his appointment with her. …..

A friendly dermatologist solves the mystery of Aaron’s symptoms

Well to say the very least the visit with her was a revelation!

We walked into the room and she greeted Aaron with “Ah so you are the medical mystery man?”
She then told us that when she saw Aarons blood report she had actually called the lab to see if they had made a mistake as his markers for immune response (sorry I can’t remember the actual medical term) were off the scale at over 1.600, apparently a reading of 250 would be at worrying high level and indicate Coeliac disease. She told us to remove Gluten from Aaron’s diet immediately and got us an appointment to see his dietician.

Laura our lovely dietician gave us valuable advice and recommendations on gluten free products and a few samples for Aaron to try.

Usually a gastroscope and biopsy would have been the way to diagnose Coeliac disease but due to Aaron’s extreme levels and the progression of his dermatitis herpetiformis it was deemed unnecessary to put him through the stress of a gastroscopy.

Aarons rash is now completely gone and he leads a happy and full filled life even with his coeliac, we cook the same way for everyone at home and Aaron has his own cupboard with his ‘special’ foods in.

A word from the man himself:
I don’t have an itchy rash anymore, I’m very happy about that!
I like to go shopping for my special food and I ask my mum if I’m not sure if I can eat it. My sister buys me a gluten free hamper for Christmas, I like that, it has biscuits and cakes in. Gluten free is ok now I’m not sore and itchy. I like Laura, she helped me.

Adapting to gluten free wasn’t too tricky for Aaron

Aaron copes very well with his condition given his learning disability, he always checks labels for the crossed grain sign and if he’s unsure will ask someone if it’s safe for him to eat. We didn’t really find the adjustment to a gluten free diet very challenging. We cook from scratch using fresh ingredients at home anyway but Aaron enjoys choosing from the amazing array of gluten free produce that is available… you really don’t need to “go without” if you are diagnosed with coeliac disease, we found a few minor adjustments and a keen eye on labels are all that’s needed, it really doesn’t need to be a drama.

Aaron loves Homemade Gluten free chocolate brownies, the recipe is as easy as can be just melt 200g butter in a pan then mix together 200g caster sugar, 90g Brown sugar, 1tsp vanilla extract, 3 Large eggs, 40g cocoa powder, 70g gluten free flour and 75g chocolate chips in a bowl. Add melted butter, stir well and pour into a greased square cake tin and bake at 200°c for 30-35 mins… they are cooked once the centre isn’t wobbly… allow to cool then enjoy with a nice cup of tea.

For and on behalf of Aaron…
A Coeliac but no longer a sufferer!